4minute shatters a mirror but manages to avoid being cursed with seven years of bad luck.


Did you like the song?
Lol, I got a request for this song, and since I could literally talk about it in my sleep, I thought, what the heck. Although the requester didn’t like the song, it remains one of my absolute favorite Kpop songs and videos ever.

Now don’t get me wrong, “Mirror Mirror” could have been a complete train wreck. Most songs maintain roughly the same tone throughout, i.e. happy, depressed, etc. “Mirror Mirror” starts off kind of mysteriously and then experiences a massive shift (right before the “nae geoura (geoura geoura)” part), then reverts back. It’s very strange and at first rather jarring because there isn’t really a transition between the various sections.

I would have preferred some lead-in to the switches, something more like the building drumline in the song “Happy Together” by the Turtles than the random dramatic tonal shift in the song “Forget It” by Jewelry S (just two examples off the top of my head of other songs that do this).

But I think ultimately it works for 4minute because the tonal shifts aren’t just a one-time thing; they repeat, so we start to expect them and, in my case, look forward to the next change. And they allow for a greater range than in many songs. The only section I didn’t like was the bridge with all the “baby, I like that” stuff; the song loses a lot of energy there. 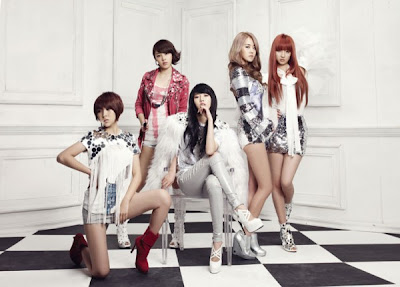 Sohyun, Jiyoon, Hyuna (seated), Gayoon, and Jihyun.
What was your favorite part of the song?
Without question the “nae geoura” part. I love doing the mirror dance with my hands. :)

Does the English make you want to rip your eardrums out?
Yeah…the English needs work. It starts out with Hyuna saying, “4 minutes left,” except it sounds unfortunately like she’s saying, “4minute slut.” *cue field day for anti-fans* And what is heard cannot be unheard (sorry to those of you who had never heard it that way before now).

Jiyoon also has some trouble with “Baby, I like that, baby, baby, just, I like that,” but it’s not too bad. (It did take me forever to figure out what she was saying before “Let me fix my makeup”—turns out it’s “Oh mirror shine.”) Gayoon continues the trend with “let’s live it up” and “let’s make it up” with “live” and “make” weirdly pronounced. However, I am eternally thankful that the main chorus is in Korean because it taught me that “nae geoura” means “my mirror.” Thanks, 4minute!

Also, how awesome is it that unlike the evil queen in Snow White, 4minute concludes that they are the fairest in the land? Girl power (kind of)!

Did you like the video?
I really enjoyed it. Not only are the girls wearing shiny metallic clothes, they’re in rooms of mirrors or being viewed through prisms or other glass filters. The only concept that threw me for a loop was the section where the girls are in hip-hop clothes. I guess the stylists suddenly remembered they were doing a 4minute video. 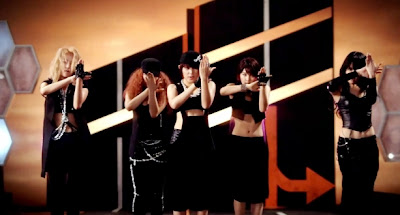 Any excuse to show off their killer abs.
Was there a storyline? If so, did it make sense?
Not really. The girls are trapped in a mirror world. And Jihyun has a harem of five men in reflective clothes. 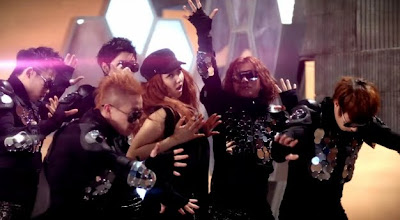 It does make me wonder if there are any other secret inhabitants of Mirrorland.
Was the dance cool and distinctive?
Absolutely. The whole dance is fun and distinctive and flows really well with the music and the meaning of the song.

The “mirror mirror” part.
Plus we have this awesomeness:

Hell on the knees but heaven on the eyes.
There’s a reason the girls wear kneepads when performing this live. Ouch. But it does look incredibly cool and sexy.

Do the members look good?
Jihyun doesn’t get enough screentime, and Gayoon’s blonde locks take a little getting used to. But everybody looks amazing, as usual—hotness awards go to Hyuna and Jiyoon—except, sorry, I’m not a huge fan of Sohyun’s look here. The slicked back hairstyle is too severe for her cute face and the top she’s wearing has these invisible straps that really diminish the look. If you can’t rock the strapless look, it’s simple: don’t wear strapless stuff.

Jihyun, Gayoon, Jiyoon, Hyuna, and Sohyun.
Which member stood out the most?
It’s a 4minute video, so Hyuna (with Jiyoon) stood out the most. Seriously, this is true every single time. But I think that Gayoon looked pretty regal in many of the shots. 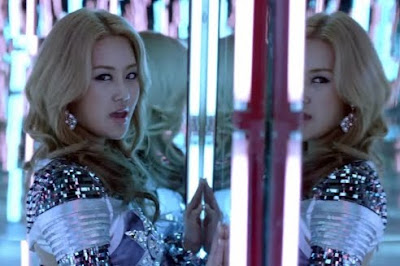 Gayoon and her reflection.
Do you like it enough to buy the song?
I do; I did; I dance listen to it almost every day and am not sick of it yet!

Any ending thoughts?
Anybody else out there a 4nia?

Boyfriend’s one-liner:
“Snow White should watch her back and avoid apples in the local farmer’s market.”

Thanks for reading! Please share your comments below! :)
Review by Kiss Kiss Kpop Reviews at 8:33 AM

Email ThisBlogThis!Share to TwitterShare to FacebookShare to Pinterest
Artist(s): 4minute

환영합니다. I’m a Korean pop music fan in America, and I write opinionated reviews of Kpop music videos. Please feel free to request a review and to disagree with me. Check the archives for a masterlist of past reviews.
★ RSS
★ Tumblr
★ Twitter
★ Facebook Page
★ Ask Me Stuff
★ My Edits
★ Learn Kpop Member Names